Wow! It has been almost two weeks since my last post! It felt like just a couple days ago! Where to start…

Nothing too exciting has really happened horse wise since my last post. Luna was a bit sore and when she wasn’t there was soo much rain the arena was absolutely SOAKING WET. Lots of brushing and cookies and beer drinking was to be had during that time.

One exciting thing that did happen was one of my good friends getting married this past Saturday! I can’t believe that it FINALLY happened, after 9ish long years K&J finally tied the knot! Us bridesmaids and the bride started it off right at 9am with mimosa’s and some good tunes while we all got ready. It ended up raining during pictures but a little rain never hurt anyone and rain is supposed to be good luck on your wedding day right? We ended the night with LOTS of dancing, and I mean LOTS. More dancing then I have ever done in one night before! Oh yeah, that dude of mine came too, we clean up okay I guess 😉

Finally got to get on the mare last night after almost two weeks. Still a bit sore if there are rocky areas in the arena but she was FABULOUS. Loads of energy which is evident in the canter but she was so willing to work and light and just awesome. Got a decent ride in with her new boots on too. I picked up a front pair of the NEW Back On Track royal tendon boots in brown. I have had two rides in them, the first one not being very substantial but yesterday was a longer ride. I will do a full review of them when I have ridden in them a bit more, so far so good!

Rain, rain, rain and more rain. That is what is in the forecast over the next few days! Yes, we really do need it, BUT, not all at once!

And of course the mare isn’t sore anymore!!! WHHYYY?!?!?!? 40mm between right now and the end of tomorrow. Rain + no indoor arena = no riding for this girl! I guess there will be lots of brushes and hand grazing till it is somewhat dry out. That also means one wet, soggy dog in my car! Good thing she doesn’t get dirty being a white dog!

I have also finally found a pair of boots that I want to buy : Back on Track Royal Open Fronts! They JUST came out with them and we are getting the “dressage” version into the tack store I work at early next week so I am hoping that they can get added to the order and come up! I have been looking for a pair of open fronts with the tab closures that fit Luna’s leg’s for quite some time now. I have my coach’s leather lined Veredus boots that fit but I haven’t ridden her in them not have I decided if I want to buy them yet or not

So here is hoping I can get these boots in ASAP and try them out! Once I do, I will write a review on them with a comparison of the other boots that I have used on her! 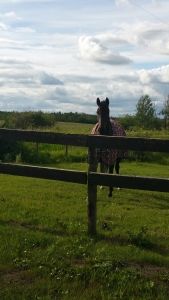 A blog post isn’t complete without the star of the blog in it! Really can’t wait till it is dry enough to ride out!

Well nothing too exciting has happened in my life lately. Which is why I haven’t updated in over a week! Pony got her feet done last week and we decided at the last minute to try and get shoes on her but my farrier didn’t have the time to get them on…which means she is a bit tender right now from the rocks in the arena. The ground has been super hard too which hasn’t helped!

And then there was today…

The horses stayed in their small paddocks vs going out to grass because weeds in the area were getting sprayed. Well clearly Luna and Twiggy decided it was time to screw around! I get out there, once of her duct-tape booties is still on and mostly in one piece from last nights hoof packing, the other was lost in the mud and her right front was….interesting looking. Clearly they were fooling around a little hard. Puffy and lumpy. Yippee. It wasn’t hot and it was hard to tell if her feet were ouchy or her leg was sore! OYE!

I did find out this weekend I have a new talent….MAKING SANGRIA! Oh man am I good at making Sangria! OMNOMNOM! Shout out to Lemon and Lace for the recipe! I put peaches and raspberries in it and used the chardonnay (different brand though) as suggest and it was delicious but deadly.

After nearly a YEAR without having a dressage lesson with my dressage coach… IT FINALLY HAPPENED! And it was glorious!

I was doing a lesson every other week at the old barn with her and the second last lesson I was supposed to have, Luna decided to run around her paddock like a Luna-tic (get it? haha) after they brought her sister in for the night and fell over slicing up her leg! Then the day before the next lesson (2 weeks later) I brought her in and her face was HUGE!

I had been there less then 24 hours before and she DID NOT look like that! Vet came out the next day and without seeing her she said “Oh it could be a broken jaw” …… Well it wasn’t. Appeared to be a fracture in one of her teeth. 3-4 weeks of antibiotics later and it went away and hasn’t come back since. Phew! BUT that did give us more then a month off by the time it was all over with. And by the time she was fit enough to make it through a whole lesson my coach was off to Florida for the winter 😦

Fast forward to when she was on her way home, I had moved to my new “winter barn” and started jumping more. Of course this barn was on the OTHER side of the city and I was the only one that was lessoning with her there. That and she was on baby watch. And then I moved to Luna’s “summer home”.

But FINALLY we could get together for a lesson last night! Of course I was running late and got there AFTER she did but I got ready in record time! Luna was awesome. The weather was iffy, windy and kind of chilly but she warmed up well and after the ride the night before I was extremely happy.

We worked on our crookedness, and she gave me some great exercises to work on. As well as fixing my over active seat in the canter. Which has been a part of our issue over fences. The difference it made was awesome. Hellooooo dressage pony! The Freestyle in her definitely came out to play last night!

Here is an obligatory Luna picture! I love this picture of her and her mama. They are both so full of ‘tude. 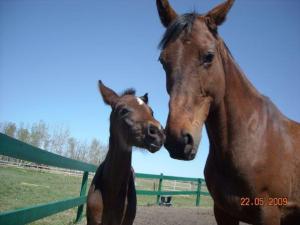 She Moved to Texas